Under the Patient Protection and Affordable Care Act (ACA), individuals are required to have health insurance while applicable large employers (ALEs) are required to offer health benefits to their full-time employees. In order for the Internal Revenue Service (IRS) to verify that (1) individuals have the required minimum essential coverage, (2) 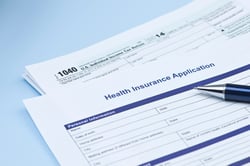 individuals who request premium tax credits are entitled to them, and (3) ALEs are meeting their shared responsibility (play or pay) obligations, employers with 50 or more full-time or full-time equivalent employees and insurers will be required to report on the health coverage they offer. Reporting will first be due early in 2016, based on coverage in 2015. All reporting will be for the calendar year, even for non-calendar year plans. Mid-size employers (those with 50 to 99 employees) will report in 2016, despite being in a period of transition relief in regard to having to offer coverage. The reporting requirements are in Sections 6055 and 6056 of the ACA.

The IRS has issued draft 2015 forms, which include a few changes from the 2014 forms. The biggest difference between the 2014 and 2015 versions are on Form 1095-C, which in 2015 will likely include (assuming the draft forms are finalized as they currently appear) a “plan start month” field, allowing a filer to indicate the first month of the ALE’s plan year. The draft instructions indicate this would be optional for 2015. ALEs could use the 2014 format instead of filling out the information, or in the alternative may either fill out the first month of the plan year or fill in “00” rather than the actual first month. Beginning in 2016 this field would be required. Currently it is unclear if employers can use the 2014 forms if they choose to use the 2014 format, or if they should use the 2015 format and leave the field blank.

In 2016 it is anticipated that for Form 1095-C, there will be two new indicator codes for Line 14. These codes would indicate if an offer of coverage to an employee’s spouse is a conditional offer.

Draft 1095-C (Reports to individuals and IRS on coverage offered)

Draft 1095-B (Report to individuals and the IRS on MEC)

For information on which forms employers should use for self-funded plans and fully insured plans, download UBA’s PPACA Advisor, “IRS Releases Draft 2015 Forms for 6055/6056 Reporting.”